It was almost 5 o’clock in the evening when we topped out. The sun setting to the west was shining on the dome and the two standing there.

It was Yasuhiro Hanatani, a professional alpine climber, who chose Takidani. If you want to talk about the history of mountaineering in Japan, you can’t miss Takidani. The magnificent rock walls protruding from the Kamata River to the Hotaka ridge as high as 3000m are second to none. It’s like a rock amphitheater.. Hanatani said, ”I have always wanted to climb in the Takidani area.” He also selected the route from Diamond Face to the west wall of the Dome out of many other possible routes.

The purpose of this project was to show some real aspects of climbing. So the production team was intentionally not given any idea about the route. It was made clear to everyone that the climbers were the only ones to determine the route. Maybe we should put it this way: the 10 members who participated in this shooting became one as a mountaineering party. Everyone did their best to achieve a wonderful climbing and filming experience.

In early September, Yasuhiro Hanatani, filmmaker Masaki Sekiguchi, photographer Yusuke Hirota, and the supporting staff member Yoshihiro Matsuda climbed Hotaka for the location scouting to determine the shooting locations and to observe how the morning and evening sunlight reflects on the rock walls. The scouting mission was a success. They determined where to set the two cameras and also find out when the rock walls were the most beautifully and three-dimensionally illuminated by the sunlight. After climbing down from Hotaka, they moved to another climbing area in the Shinshu area and checked various details for shooting using climbing ropes.

At last the day came to start shooting. On September 17, we left Kamikochi under a blue sky. It was a sunny day after a typhoon had passed. On the way, we drove along the right bank of the Azusa River to visit Hotaka Shrine, located near Hotaka Station in Azumino. This shrine is located in a mountainous area, yet is dedicated to the gods of the sea. Backed by Myojin Pond and Myojin mountain looking beyond you can see the Hotaka mountain range. Here we said a prayer for safe climbing and the success of our filming.

After staying overnight at the Karasawa Hut, we climbed the south ridge of the Kitahotaka-dake in the early morning on the 18th. Hanatani and his partner Kenshi Imai prepared for the climb. he shooting team was divided into 2 groups. Sekiguchi, who was going to shoot from position 2 on Daini Ridge and the mountain guide Tsutomu Sugisaka climbed down with Hanatani and others to the halfway point. At position 1 Hirota was holding his camera and Matsuda was supporting him. The producer Hirotaka Takeuchi, who originally had the idea for this project, and I were to observe every move from the north peak of Kitahotaka-dake. From here we could also observe the actions of the two shooting teams very well.

Based on Sekiguchi’s calculations of daylight hours and the time needed for the climb, the team started to climb down to Takidani at 9:30am

After that, we could finally see the climbers again from the north peak where we had stayed, as the Diamond Face climb was about to come to an end. It was past 12 o’clock noon. While looking through the telephoto lens of the camera, I thought to myself, “that was quicker than expected.” Nowadays, we don’t see too many people climb the Diamond. Several years ago,Polish climbers tried to climb it, but we heard at Kitahotaka Hut that the conditions were very bad and that they had come back injured. How fif the two manage to climb with poor protection?

In contrast, we could see from far away that the climbers on the west wall were having fun. The severe atmosphere when they had gone through Diamond Face had changed to a positive atmosphere. A 60 meter long climbing rope was fully extended and they truly enjoyed climbing. I hope you can feel it by watching the film. There were some white clouds floating under the blue sky. Rocks were dry and the winf was calm, which was not typical Takidani in some sense. In the afternoon, fog began to appear from time to time. However, it didn’t stay long and cleared quickly each time. This didn’t affect climbing, however there were times when the camera couldn’t follow them because of the fog. On such occasions, we asked the climbers to wait for a while, until the visibility improved.

Soon after, Hirota’s group moved to the top of the Dome. From there they were going to climb down the north wall side and wait for the two climbers. Before they started to down climb Hirota made radio contact saying, “We can’t witness the climbers from here. What’s the relationship with the camera’s position?”

They were near the Dome, but this is Takidani. A subtle move of the rope could cause an unstable stone to fall. Hirota was anxious if the cameras and the climbers were located in the same line. We felt it was really a good idea to stay in a place where everything could be overseen, because we could continue to see the north and west walls, the cameras and the climbers and make reports.

It was past 5:30pm when everyone, including the shooting teams, made it to the peak of Kitaho. It was so impressive that Sugisaka said “I truly experienced a great thing. I felt that I wanted to climb it again.” In actuality, the shooting took quite long, but I didn’t feel it took long at all. At times we had to catch our breath, at other times we were deeply moved, but everyone just kept their eyes locked on the two climbers.

After a somewhat late dinner at Kitahotaka Hut, Hanatani said that the retrospection of the climb kept him awake for a while. After Hanatani fell sound asleep, Sekiguchi got out of bed with his camera. There is a place where you can look down Takidani at the back of the hut. It was 4 o’clock in the early morning. It was the day of the Harvest Moon and there was a bright full moon in the dark sky. It was a gorgeous sight to behold. 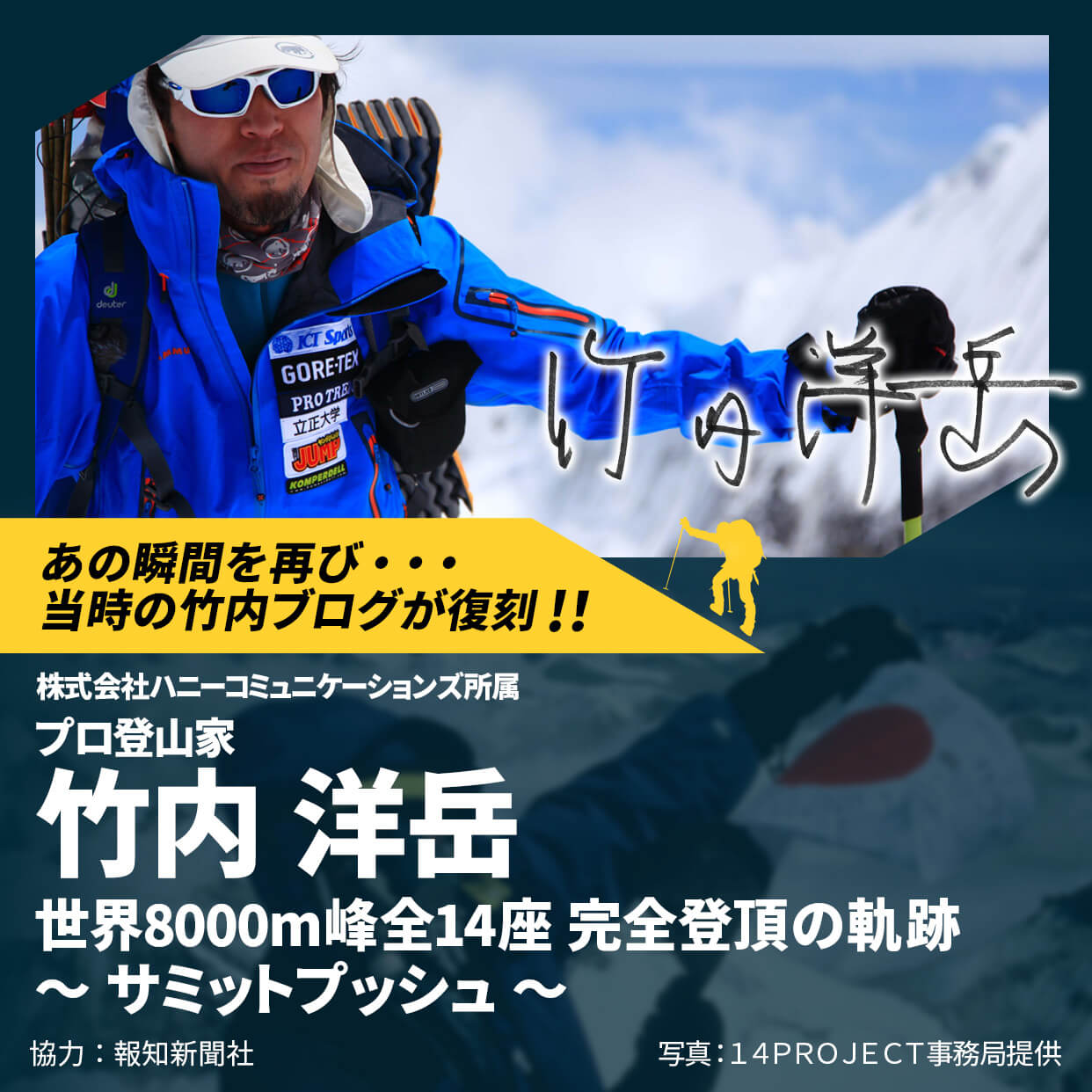